Millennials, particularly those who grew up on the West Coast, may have fond memories of Tangerine Dream. (The pot strain, not the German electronic music group.)

Tangerine Dream was actually created by Barney’s Farm in Amsterdam, even though it was commonly seen in California and Colorado in the mid-1990s. It’s still available and potent; in fact, it finished in first place at the 2010 Cannabis Cup.

But as often happens, the son has surpassed the father – at least, metaphorically speaking.

In reality, the Tangie strain isn’t a direct descendant; Tangie was created as either a remake of or a tribute to Tangerine Dream. But it has most of the same terrific qualities and effects and has received even more honors than Tangerine Dream.

Just like its predecessor, this is a strain developed in the Netherlands but you’re probably most familiar with it if you live in the Western U.S. However, its availability throughout North America is growing rapidly. And most who’ve sampled Tangie would say that’s a very good thing. 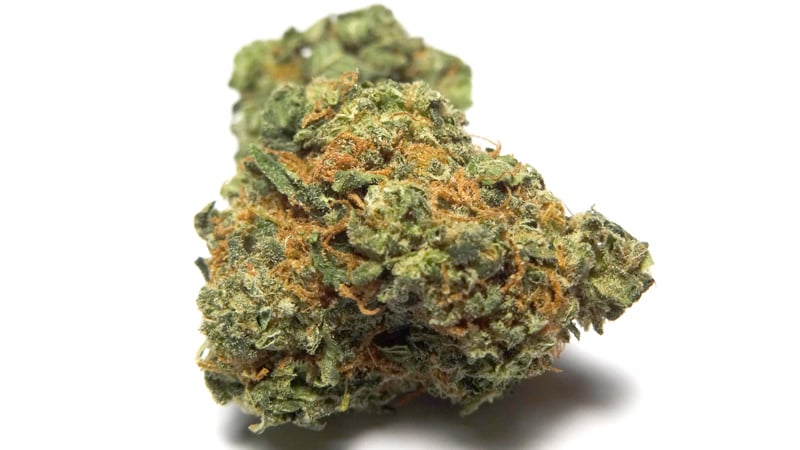 Tangie is a hybrid, but it’s unabashedly Sativa-dominant with most of the benefits that come with a Sativa strain. The THC content is impressive and the cerebral high hits quickly, making Tangie an excellent choice for those in search of a creative, focused experience. Oh, and it tastes and smells really good as well. There is very little CBD content.

Tangie was created to pay homage to Tangerine Dream, and each strain was originally cultivated in the Netherlands, but the two strains have different lineages. The original Tangerine Dream was a cross between G-13 and a Haze descendant, while Tangie is the cross of California Orange and a skunk (probably Skunk #1, the strain used to create so many well-known hybrids).

The well-known Dutch grower DNA Genetics is behind Tangie. Its distribution and use began in Europe, but clones and seeds are readily available to cultivators and home growers. DNA Genetics has also reached distribution agreements to increase Tangie’s availability throughout the United States, Canada, and Central America.

Users who’ve given this strain a try often consider it a go-to favorite, and “professionals” love it too. It’s a regular award-winner at Cannabis Cup competitions; in one hard-to-believe ten-month period, Tangie won ten different Cannabis Cup awards.

This strain may be “Example A” for what you can expect from a potent but user-friendly Sativa-dominant.

Tangie’s uplifting and cerebral high sets in quickly last for a good amount of time and recedes gradually. That not only allows the user to continue functioning but to function with greater focus, creativity, and energy. The euphoria and happiness often make the work to be done more enjoyable, too.

No discernable body lock or tiredness sets in during or after the use of Tangie, due to Sativa’s predominance in the strain. The residual effect is more of long-lasting happiness and contentment, leaving the user refreshed rather than fatigued. There is a lot of THC content here, however, so the effects are best handled by regular smokers instead of novices.

Tangie: The Taste and Aroma

Since this hybrid has some skunk roots, you can expect Tangie to provide some of the sensory experiences associated with a traditional weed strain. But they’re not the features you notice most when smoking a bowl of Tangie.

The taste and smell of this strain are clearly citrusy, thanks to its California Orange parentage. They’re sweet and pleasant; you may not be able to distinguish between the flavor and aroma of tangerines and oranges in real life, so it’s likely that you can’t tell whether Tangie tastes and smells more like oranges or tangerines. That doesn’t really matter – whether you’re a citrus aficionado or not, this pot is pretty delicious.

That’s why budtenders in dispensaries, when asked to recommend a yummy strain, quite often suggest Tangie as their first choice (if they have it available, of course).

You’re not going to turn to a Sativa or Sativa-dominant weed strain for potent pain relief, and Tangie is no exception. Without the strong body high which is useful for easing serious or chronic pain, Tangie isn’t the best way to deal with pain issues.

Instead, it’s better for use against depression and anxiety because of its uplifting and energetic head high. Even those suffering from mild stress or mood problems will find that this strain can help. It’s a good choice for people dealing with fatigue as well.

Secondary benefits of Tangie can include appetite enhancement, and the easing of digestive problems, and insomnia that can be triggered by anxiety. Some report that it also helps them with nausea, but there are better antiemetic strains out there.

Surprisingly for a potent Sativa, there is very little chance that an experienced user will have anything to worry about when it comes to paranoia, an increase in anxiety, or other common side effects of THC-heavy Sativa strains. Naturally, novices will be a bit more prone to those issues.

All that most users may have to deal with are the usual bloodshot eyes or dry mouth, or – if this can be considered a negative side effect – the munchies.

Tangie isn’t the easiest plant to grow indoors. The biggest issue is that it grows extremely high during its first 5-6 weeks, meaning it needs a lot of headroom and requires constant topping-off (or growth with the FIM technique) in order to stimulate lateral growth.

On the other hand, this plant is quite sensitive to temperature, preferring warm (70-85° F) climates that are relatively dry. That limits the areas of the country where Tangie will thrive as an outdoor crop.

If you are lucky enough to live in the right climate, however, outdoors is the way to go. Tangie loves growing in warm soil, as long as it’s tended properly with applications of nitrogen in its early stages, and potassium and phosphorus when flowering; the nutrients will enhance the plant’s distinctive aroma and taste. Those who use grow rooms have found that moving their plants outdoors during the flowering stage can be beneficial.

Tangie flowers for nine weeks or so, with late September to early October the best target period for harvesting. The plant’s yield can be very good when grown with best practices: between 400 and 550 grams per square meter, with the more bountiful harvests produced by outdoor plants. The buds are quite sticky, making them a good source of resin and other concentrates.

The Bubblegum Strain: A Fun, Relaxing, Sweet And Tasty High

Mendo Breath Is a Taste of the Emerald Triangle

Top 5 Strains to Keep You from Vomiting